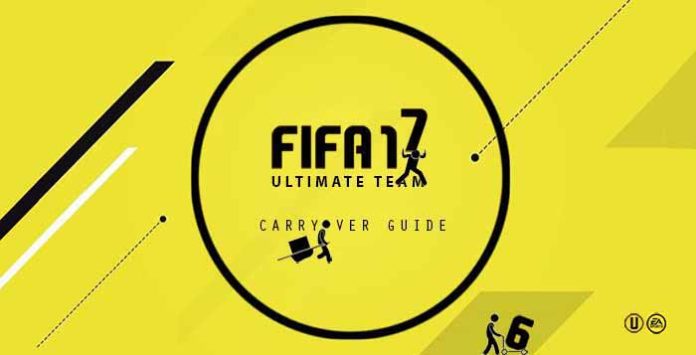 Read our FIFA 17 Carryover Transfer Guide for FIFA Ultimate Team to avoid unpleasant surprises and unnecessary spending. Many players have plans to buy FIFA 17 but they never thought about what’s carried over from FIFA 16 to FIFA 17 Ultimate Team. They should do it and as soon as possible. For those, this guide may be very disappointing. Prepare yourself properly for the new FUT.

Introduction to FIFA 17 carryover
What’s carried over ?
Move to FUT 17
Change to another console

Why the FIFA 17 carryover transfer details are so important?

We thought that creating a guide like this wouldn’t be really necessary since most players already know what they’ll be able to carry over to FUT 17. However, we started receiving several help requests concerning this theme. A lot of our followers have started playing FUT this year, so this is completely understandable. Even we ourselves have been in this position seven years ago when we first started playing and looking for the same answers. We have been receiving these questions so frequently that we felt the need to look all over the internet and see if there are really that many people in the same situation… and yes there are. The bad thing is that among all the answers given by the most experienced community players, there are many, many inaccuracies and contradictions.

Whoever is familiar with us knows that we don’t like to leave the slightest questions unanswered. That is why we’ll be exploring everything there is to know about the FIFA 17 Ultimate Team carrying over: what you’ll keep from the previous game, what happens if you switch consoles, what you need to do to switch to FUT 17 and how FIFA points transaction works. No matters if you are a FUT 16 regular gamer or fresh to the game, keep up with us as we clear things up. As always we will swot up your knowledge and bring you right up to date with what is going on!

This is the most important question: will I keep my coins and players from FUT 16 ? What can I bring to FUT 17 ? We’ll be as clear as we possibly can:

If you didn’t know coins can’t be transferred to FUT 17, then you must be disappointed. We’ve all been there so don’t worry, you eventually get over it. Plus buying cards won’t help since they can’t be transferred as well. Don’t know what to do with the coins you’ve been arduously collecting for a year? Give them to someone you know who will not play FIFA 17.

If you’ve got Messi in your team and you’re buying FIFA 17, it’s time to say goodbye to him. None of the cards you currently have in your club will be transferred to FUT 17: not the players, staff, consumables or even your club items. Nothing.

The EASFC Catalogue is a kind of a store where players can exchange FC Credits for hundreds of items. For Ultimate Team it’s possible to increase the targets and transfer lists, receive coin bonuses, change the club’s name, increase the maximum number of squads, get players on loan, and even buy “super” 99 contracts for your players. Since this catalogue changes from FIFA to FIFA, you won’t be able to bring items you purchased on previous games. But don’t worry. You will be able to redeem the items of the new catalogue as long as you have enough Football credits to buy them.

Are you that one who’s in the Leaderboard TOP 100? Congratulations. Time to take a screenshot, otherwise this awesome deed will be easily forgotten, left behind to ashes. Your Wins/Draws/Losses history will be lost when you stop playing FIFA 16. It won’t count towards FIFA 17. And even if you decide to keep playing it, EA will put an end to it in less than 2 years because, well, they’d just rather not keep spending money on servers few people will playing at. In their words, they do this so they’re able to ‘enhance the user’s experience‘. Better just go take a screenshot then, huh ?

The list of things you’re going to lose for FUT 17 is just endless, isn’t it ? Just like Juventus ten years ago, you will lose all your tournament and season titles if you start a new FIFA. Except for the fact that you haven’t done anything wrong.

You already know this one: new game, new achievements/trophies. Achieving objectives that each console grants you will not be related to FIFA 17, naturally, because they’re specific for each game. Waiting for a TOTW card from a pack? EA thanks your effort. Or not.

XP leveling is a system that a measures how experienced you are in the FIFA universe. Every time you earn XP, you gradually build up your leveling bar until you reach a new level. Once you unlock a level, you’ll never lose it within your account. It doesn’t matter the game mode, platform or the game on its own, basically you’re going to maintain on FIFA 17 the XP you have at the time. You can even go back to FIFA 16 and still earn XP. It’s shown on the superior right corner of the screen, placed below your ID. Maintaining your XP will give you some advantage over the beginners because you’ll have access to several EASFC Catalogue items they don’t.

FC Credits (Football Club Credits; FCC) is the coin used on EA Sports Football Club. Works exactly like the XP, being linked to your Origin account and not directly related to the FIFA you’re playing. It’s basically used to purchase EASFC Catalogue items and it’s shown immediately in front of the XP. Don’t forget to save a few FCC to purchase coin boost items at the start of FUT 17.

One of the things EA Sports allows you to keep on FUT 17 is your club name. When you start it for the first time you’ll be asked if you wish to change it or just leave it the same. If you choose yes, you’ve got the right to keep it. You can only change it later buying the club name changing EASFC Catalogue item or through the Manager Tasks. If you choose no, you’ll be creating a new name and the old one will be available for other people to use.

FIFA Points are an alternate to coins that are used to purchase FUT packs in the store or enter FUT Drafts. If you don’t intend to spend all your FIFA Points on FUT 16, you can transfer them to FUT 17. You can even buy some by the end of FUT 16 so you can use in the FUT 17 released date, since it won’t be purchasable during the FIFA 17 Web App Webstart period. However, this is a one-time transfer, so you’ve got to be careful when you start the game for the first time. If you have an EA or Origin Access membership, you be able to make the transfer during early access. What do you need to start playing FUT 17 After so many disadvantages you might be wondering if it’s worth it or not getting the new FIFA 17. If you’re a fan of the series, it’s safe to say that we recommend it. Besides the renewed experience inside the pitch, you’ll be able to build your team based on what’s going on in the real life football. The transfer market will allow new combinations of players and their ratings will be updated. Before you know you’ll forget what was left behind.

In order to start playing FUT 17 you obviously need to buy FIFA 17. Use the same Origin account you’ve been using so that the system recognizes all your data: FCC, XP, club name and FIFA Points. The older players’ fidelity will be rewarded with early access to the Web App around 2 weeks before the official game release date; all that followed by free starter packs.

What happens when you switch console

New Gen Consoles are getting cheaper and for that reason many players will use FIFA 17 as a reason to upgrade to the new consoles generation. If that’s your case, get to know what you have to do so that everything’s fine. The FIFA 17 carryover for a new console is a topic little more complicated than it seems, so we’ll try to simplify:

You’ll only keep what’s linked to your Origin account. That is your XP and FCC.

Switching consoles doesn’t mean any disadvantages since you use the same platform (Playstation or Xbox) and Origin account. We’ve talked about what’s being lost and kept earlier in this article. In other words, you will keep the XP level, FC Credits, name and FIFA Points, and you will lose the coins, cards, EASFC catalogue items, match history, current division, trophies and awards.

This is something has changed in FIFA 16. You no longer can share your stuff between different consoles, even if you are still playing in the same platform.
This means coins, club items and transfer market items will no longer be shared between Xbox 360 and Xbox One, and between PS3 and PS4. You’ll only keep what’s linked to your Origin account. That is your XP and FCC.

Whoever plays FUT 17 on a console will be able to keep absolutely everything when they switch to another console. Won’t see a difference. Just use the same Origin account and you’ll be able to see the system recognizing your XP, for example. However, you’ll be requested to restart Ultimate Team if you’re not logged in with your PSN ID or Gamertag. Don’t ignore this simple step.