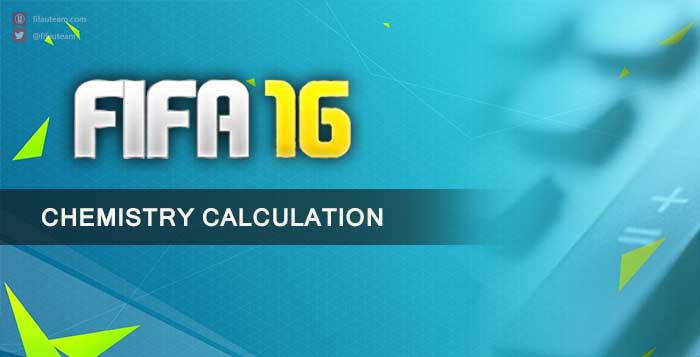 The way the chemistry is calculated is probably the most well guarded secret in FIFA 16 Ultimate Team.

We came up with the idea of uncovering it.

How FIFA 16 Chemistry is Calculated

If you are not familiar with chemistry, please read carefully our Chemistry Guide or watch the following video.

Let’s find out how FIFA 16 Chemistry is calculated.


The Chemistry Effect on the Game

In the first place it is important to know that the chemistry value that is used in game is the weighted average of the individual chemistry (75%) and the squad’s chemistry (25%).

In other words, you can say that the attributes that each player starts a match with depend directly on the individual chemistry and partially on the squad’s chemistry. The following equation shows how the chemistry in game is calculated for each player:

Team Chemistry represents an accumulation of all the Individual Chemistry values. It varies between 0 and 100 and can be calculated with the following formula:

This formula allows team’s chemistries up to 110. However, in practical terms, any value that is superior to 100 has the same effect as 100.

The Individual Chemistry varies between 0 and 10 and can be calculated with the following formula:

This formula allows individual chemistries up to 12. However, in practical terms, any value that is superior to 10 has the same effect as 10. Being possible, in theory, to get more than chemistry 10, allows other ways to reach the maximum chemistry and increases the diversity of teams with high chemistry.

The PLC depends of the player’s position and of the connections with his team mates. It varies between 0 and 10 and can be known on the following table:

The following table shows all the combinations of possible positions:

The rows correspond to the value L, which measures the links intensity of a player with his team mates, and that can be calculated as follows:

The Numerical value of a link can be:

The main Managers increase the Individual Chemistry by 1 point for every player that has a matching nation or a matching league.

Loyalty increases the Individual Chemistry by 1 point for every player that has pulled from a pack (first owner) or has played 10 matches.

However, the Individual Chemistry boost of first owners cards with more than 10 matches is 1. The bonus can not be higher than 1, so getting these two thing is not important.

Legends also need good chemistry to play better. Since they don’t have a league or club associated, there are slightly differences on how to calculated their chemistry. Basically, they link well with other Legends just like regular players link with their team mates. It’s like being a legend was a club.

In FIFA 16 Ultimate Team, the way how legends connects with other players has changed, to avoid penalize teams with legends:

1 – Weak Link (Orange)
Not a Legend and different Nationality

0 – Dead Link (Red)
Legends don’t have dead links no matter the player they are linking.

Manager bonus and loyalty bonus work with Legends just like for any other player. There is a Manager League card ‘Legends’ that can be used to give the extra chemistry point to your Legends. In certain cases, it may be useful to reach the maximum chemistry.

It is too easy to find the team’s chemistry but, in order leave no doubts, we’ll calculate a hypothetical individual chemistry.

Imagine that we are trying to place Luis Suárez as LM on our 4-4-2 BBVA squad. How much individual chemistry he can reaches ?

The first thing to do is to see in the table of positions which ones have something to do with LM. Applying CF-CAM and CAM-CM cards, he will become a CM, an unrelated position to LM (orange). He has two strong links (same club with Iniesta and Alba) and one weak link (same league with Benzema), in three links possible. It means that L = (2+2+1)/3 > 1.6. So, looking this L on the orange column of the PLC table, we find that Suárez chemistry is 5, without bonuses. He didn’t need so much good connections since he would get the same chemistry even if L was lower than 1.6 and higher or equal than 1. With a manager from BBVA and playing more than 10 matches, he gets two extra chemistry points (5 to 7).