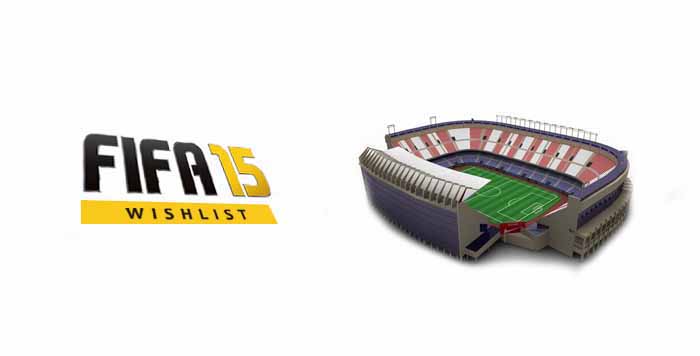 It is time to hear the community about what they want. Let’s build a FIFA 15 whish list with the most wanted new stadiums.

August 9th, 2014
Until now, EA Sports only has announced eight new BPL stadiums for FIFA 15.
As soon as new stadiums are announced, we will publish them here.

This is the time of the year in which everyone has an opinion. Everyone dreams with the perfect FIFA. This time we will do it in a different way. This year, it is the FIFA community who has the chance to tell us what they want. We will publish four topics to discuss: new additions, leagues, stadiums and players ratings.

We have asked in our social channels what the community want for FIFA 15. Now, we bring here the results. Today, we will talk about the new stadiums.

Which New Stadiums the Community Want ?

We have asked to our community which new stadiums they want to see in FIFA 15 and now we bring here the results.

The results are unequivocal. The Estádio da Luz, where the last Europen Champions League final has been played, is the most wanted. The second most voted stadium was the Maracana, where Germany has won the World Cup Brazil 2014. The other two bigger Portuguese stadiums, Dragão and Alvalade are also in the TOP 5, as well as Turk Telekom Arena, from Galatasaray.

Which chances they have to see their requests in FIFA 15 ? Continue reading to find out…

Which New Stadiums Will Be Included in FIFA 15

Everybody want to see new stadiums into FIFA 15. But it is extremely unlikely to see many new stadiums on the new game. What new stadiums may we expect to find in FIFA 15 ?

Every year, EA Sports includes a new BPL stadium into the game: Etihad Stadium on FIFA 12, White Hart Lane on FIFA 13 and Goodison Park on FIFA 14. This year, there will be eight new stadiums, which means that the 20 BPL stadiums will make part of FIFA 15.

It was almost sure that Brazilian stadiums would be included into FIFA 15. EA done almost all the work to use them in the FIFA 2014 World Cup Brazil video game. However, the license issue with Brazilian players may have made to change the plans. Or not. Another South-American stadiums may be included, showing how strong EA Sports want to be in this market.