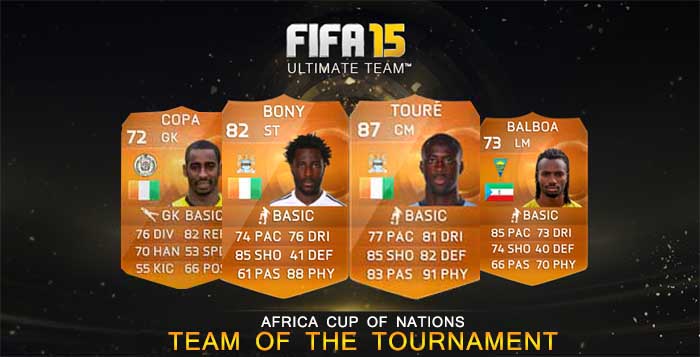 Even if you know what FIFA 15 TOTT is, we are sure that you have a lot of questions about it. Follow this short guide that will help you to understand better how the FUT 15 Team of the Tournament works.

Q: What TOTT means?
A: It means ‘Team of the Tournament’.

Q: What is a Team of the Tournament?
A: It is a group of players that get new In Form cards for their good performance in a specific competition.

Q: Is TOTT a new In Form card? I can’t find it in your cards guide!
A: No, it isn’t. TOTT is the name given to a selection of In Form players released at the same time at the end of an international competition.

Q: Which FIFA 15 TOTT will be released?
A: The one of the Africa Cup of Nations and the one of Copa America 2015.

Q: For how long these cards will be available in packs?
A: From Friday midnight until Monday 6pm (UK time) to ACN TOTT and one week to Copa America TOTT.

Q: What about the upgrades?
A: Because of the FIFA 15 TOTT release, the players upgrades were postponed for February 20th, one week later.

Q: What is the cards’ colour of this Team of the Tournament ?
A: Orange and black.

Q: Why the cards of this Team of the Tournament are not green ?
A: It is not simple. Basically, EA Sports release green cards only for top tournaments like the World Cup. The In form players of the Africa Cup of Nations and Copa America are rewarded with orange cards and are grouped in the TOTT.

Q: How it was with past international competitions ?
A: The first competition with special cards was the Euro 2012. The cards were purple, as you can see here, but no Team of the Tournament was released. In the end of Africa Cup of Nations 2013, EA Sports joined the In Form players in a single TOTT, with orange and black cards just like they are doing now. Last year, during the World Cup, green cards were assigned to the best players of the tournament.

Q: Where can I see the TOTT of previous years ?
A: Here and here.

Q: Who chose the players of this FIFA 15 TOTT ?
A: EA Sports FIFA Dev team.

Q: Which players will be chosen for the FIFA 15 TOTT from African Cup of Nations ?
A: Four players will be picked, for sure: the ones that already got orange MOTM cards. As you can see here, they are Yaya Touré, Christian Atsu, Javier Balboa and Wilfried Bony. The other players with better chances to be chosen are Henri Bedimo, John Boye, Kolo Touré, André Ayew, Serey Die and Gervinho .

Q: Who were the players of the real ACN Team of the Tournament ?
A: As you can see in the following picture, they are: Kidiaba, Aurier, Boye, Mensah, Ghoulam, Gervinho, Bentaleb, Yaya, Ayew, Balboa and Bolasie. Q: Where can I see the final FIFA 15 TOTT of the Africa Cup of Nations ?
A: Here.

Q: Where can I see the final FIFA 15 TOTT of the Copa America?
A: Here.

Q: How much the cards are improved ?
A: The MOTM cards will be exactly the same ones that were released during the competition. The other players should be improved using the same scale.

Q: Does it means that not all the players will have a new card ?
A: Exactly. Who already got a orange card will not have a new card. Their MOTM cards will be re-released.

Q: If I own a card of a player that is chosen for the FIFA 15 TOTT, will this card be improved?
A: No. It remains exactly the same, with the original rating and attributes that were defined initially in the game.

Q: Can I have both the original NIF and the new card in my club?
A: Yes. However, a squad can only have one of them.

Q: Will Asian Cup players be included in this FIFA 15 TOTT ?
A: No. Only African and South-American players will make part of this team. For EA Sports, Asian Cup is not an important competition.

Q: What is the behaviour of these cards in the market?
A: Avoid to buy them in the first hours after they being released because they are really expensive. Their behaviour is exactly the same of any MOTM card (see the following picture, please).

Q: In which packs can I pull one of these cards?
A: In any pack with players cards.

Q: Which chances I have to pull one of these cards from a pack?
A: The same ones you have to pull these NIF cards in any other time.