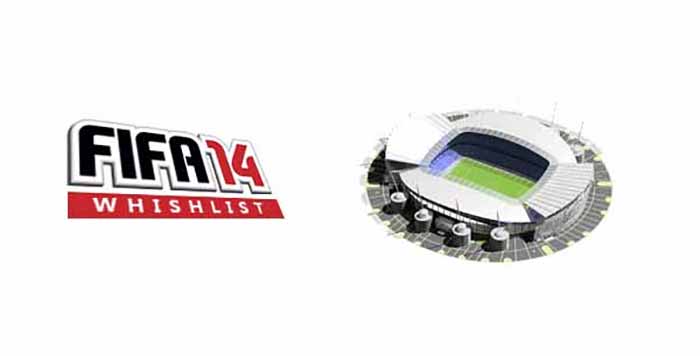 It is time to hear the community about what they want. Let’s build a FIFA 14 Whishlist with the most wanted new stadiums.

This is the time of the year in which everyone has an opinion. Everyone dreams with the perfect FIFA. This time we will do it in a different way. We will not show to you our whishlist. You can check HERE what we asked to FIFA 13, last year. We still want better servers and a stronger fight against cheaters.

This year, it is the FIFA community who have the chance to tell us what they want. We will publish three subjects to discuss: new leagues, new stadiums and players ratings. We asked in our social channels what the community want to FIFA 14. Now, we bring here the results. Today, we will talk about the new stadiums.

Which New Stadiums the Community Want ?

We have asked to our community which new stadiums they want to see in FIFA 14 and now we bring here the results.

The results are unequivocal. The Maracana, where the next Word Cup final will be played, is the most wanted. More than half of the community that answered to our questions, want this stadium in FIFA 14. The second most voted stadium was the Estádio da Luz, where the 2013-2014 European Champions League final will take place. The other three bigger Portuguese stadiums (Dragão, Alvalade and the prized Axa), are also in the TOP 10.

White Hart Lane was a new stadium on FIFA 13 but it is not in Ultimate Team. The community is asking to include the Spurs house in this game mode. The Ali Sami Yen Sport Kompleksi, also know as Galatasaray Arena, and the Argentine La Bombonera are also requested by the players community.

Will the EA satisfy the community wishes? Continue reading to find out…

Maracana is the most wanted stadium

Which New Stadiums Will Be Included in FIFA 14

The stadium where FC Barcelona usually plays was the first one to be officially announced. FIFA 13 did not have the Camp Nou as one of its stadiums because EA Sports did not get the licensing agreement but now the largest stadium in Europe (99,786 seats) will be part of the game. In the year of the current-gen release, EA Sports promise to show the stadiums as we never seen. If you want to read more details about the Camp Nou back, click HERE.

With such a great effort in acquiring the Brazilian clubs licenses and knowing the growing importance of this market as we approach the World Cup, is not ruled out that the mythical Maracana will be included in the game. For now everything points to the Camp Nou will be the only new stadium in FIFA 14. However, last year there were two new stadiums. Who knows …