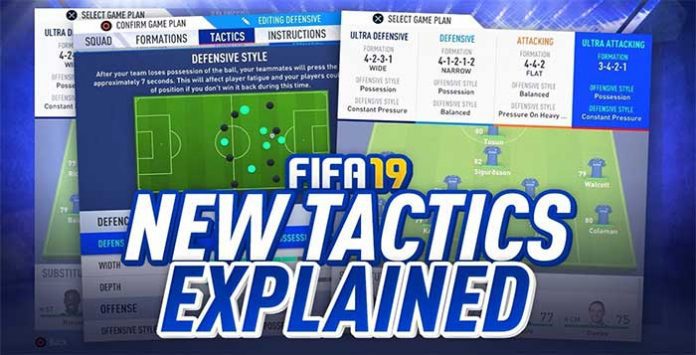 Mike Labelle, professional FIFA player for the New York Red Bulls, has reached an agreement with us. He has won seven national titles in a career that spans the past ten years. He is also an influential content creator, boasting over 280,000 subscribers on YouTube and over 70,000 followers on Twitch. He will explain everything you need to know to improve your FIFA skills. Today, he will try to explain one of the biggest new features of FIFA 19: the Dynamic Tactics.

FIFA 19 has completely revamped custom tactics, allowing players to have much more control over their tactics and to change them on the fly, something which hasn’t been possible in previous FIFA installments. Not only have park the bus and all out attack been removed from the game, but the other mentalities have been adjusted as well. Previously, ultra defensive, defensive, attacking, and ultra attacking simply controlled how many of your players sat back in defense and went forward on the attack. In FIFA 19, they have become hotkeys for what are essentially four completely customizable game plans. They have become placeholders for your tactics, meaning that you could theoretically have your offensive game plan bound to the defensive mentality, although that would be counterintuitive for many players.

This level of customization means that a much higher emphasis will be placed on having balanced squads for FIFA 19. Not only do you need to be able to master multiple formations if you want to adapt to different situations during a game, but you also need a starting 11 (and subs bench) that can work well in formations other than the one you’re set up with. One of the new features that you can customize is the amount of players that come forward for free kicks and corners. Many players complained about being countered after a corner last year, and so this finally allows you to ensure that enough defenders and midfielders are staying back when you are taking set pieces.

The new mentalities have also been renamed so that how they work in game is a lot clearer. On the defensive side of things, press after possession loss is a great tactic because it won’t drain your stamina too much and it’ll allow you to win the ball back immediately after making a mistake. Constant pressure is good if you are losing a match or if you have a super team where stamina isn’t really an issue. On the offensive side of things, long balls provides an option for counterattacking players, fast build-up provides an option for players who like fast one-two moves, and possession provides a balanced option for players who like to keep the ball for long periods of time.