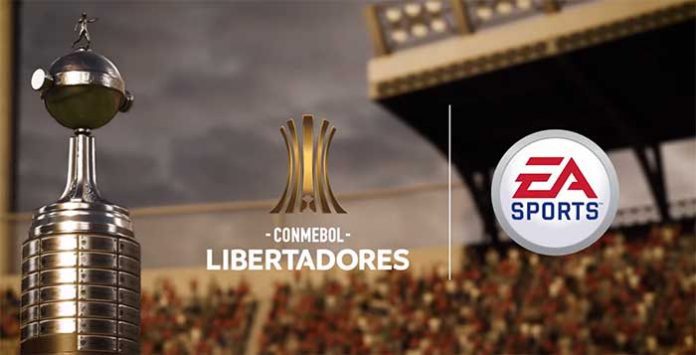 Experience the breathtaking intensity of South America’s biggest club tournament as a free* content update for FIFA 20 on PlayStation®4, Xbox One, and PC, available March 2020.

From FIFA Ultimate Team™ to Career Mode, Kick-Off, and a new CONMEBOL Libertadores Tournament Mode, feel the weight of a continent’s obsession.

Players can compete with historic clubs from Uruguay, Perú, Paraguay, Ecuador and beyond in FIFA Ultimate Team™, Career Mode, Kick-Off, and a new CONMEBOL Libertadores Tournament Mode. Follow in the footsteps of some of the top players to lead teams like River Plate, Boca Juniors, Flamengo, Corinthians, and Colo-Colo through the heated competition of South American club football while playing the CONMEBOL Libertadores, CONMEBOL Sudamericana and CONMEBOL Recopa competitions.

“This alliance with EA, one of the largest video game companies, is a major step forward for the worldwide dissemination and image of South American football. Thanks to this agreement, our tournaments, clubs and players will have greater reach and recognition among the football fans who will have a whole new way to follow their heroes,” said CONMEBOL Commercial Director, Juan Emilio Roa.

The inclusion of CONMEBOL Libertadores continues to cement FIFA 20 as the most authentic sports video game, with more than 30 official leagues, 700 teams, 17,000 authentic players, and 90 licensed stadiums from all over the world already in the game.

“Bringing two of the most prestigious continental football tournaments, CONMEBOL Libertadores and CONMEBOL Sudamericana, into FIFA 20 is an exciting step forward,” said Nick Wlodyka, GM, EA SPORTS FIFA. “This new partnership with CONMEBOL bolsters our position as the deepest football experience available as we continue to build the most authentic sports video game for our fans.”

In addition, eLibertadores, a new tournament that will continue to expand the EA SPORTS FIFA 20 Global Series, offers South American-based players a whole new way to connect to the CONMEBOL Libertadores through the competition. “The addition of the prestigious CONMEBOL Libertadores to our FIFA 20 Global Series ecosystem strengthens our connection to the global fandom of football and will accelerate the growth of esports in new parts of the world,” said Brent Koning, FIFA Competitive Gaming Commissioner. “We aim to offer the most inclusive esports competition in the world and are eager to welcome South American-based players and aspiring superstars to join the tens of millions already competing in FIFA.” The Grand Final of the eLibertadores tournament will see the top eight competitors from both PlayStation®4 and Xbox One compete from March 7-8, 2020 for the chance to earn FIFA Global Series Points along with a $100,000 USD prize pool. Common questions about the CONMEBOL DLC

When will I be able to play the CONMEBOL competitions in FIFA 20?
The CONMEBOL content update will be available on March 3, 2020 for PlayStation 4, Xbox One, and PC.

Is the update free?
Yes, the CONMEBOL content update is free to download and available for all players who own FIFA 20 on PlayStation 4, Xbox One, and PC.

What size is the update?
The CONMEBOL update will be approximately 4.8 GB on PlayStation 4 and 5.5 GB on Xbox One.

What about Brazilian teams and players?
After downloading the update you’ll be able to play with fully authentic Brazilian kits and crests within FIFA 20 Kick Off, Career Mode, and the CONMEBOL Libertadores Tournament Mode, however player names and likenesses will remain generic. Players from Brazilian clubs will continue not to be included within FIFA 20 Ultimate Team. All teams from other CONMEBOL nations will have authentic team and player names within the FIFA 20 CONMEBOL Kick-Off and Tournament Modes.

Will this impact existing Career Mode saves?
Any save game started after downloading the update will include the authentic format and presentation of the CONMEBOL club competitions. Existing save games will retain the previous generic Copa Latam competition structure.

How will I be able to experience CONMEBOL competitions in FUT?
FIFA 20 Ultimate Team will have over 500 CONMEBOL players, with special items for select players taking part in the CONMEBOL Libertadores and CONMEBOL Sudamericana. Custom live content and campaigns will also give you the ultimate connection to the CONMEBOL Libertadores. Follow @EASPORTSFIFA on Twitter and Instagram for updates as new content is added. About CONMEBOL
Founded in 1916, the South American Football Confederation – CONMEBOL – is the governing body of South American football and the oldest continental soccer confederation in the world. CONMEBOL, made up of ten member associations, including Argentina, Bolivia, Brazil, Chile, Colombia, Ecuador, Paraguay, Peru, Uruguay and Venezuela, is responsible for the organisation and governance of the main international South American football tournaments, including CONMEBOL Copa America, CONMEBOL Libertadores, CONMEBOL Sudamericana and CONMEBOL Recopa, among others.
Since 2016, CONMEBOL has undergone a series of structural reforms to modernise its governance and operations, increase the global competitiveness of its exclusive tournaments and strengthen its promotion of football development by increasing revenues and investment.
As part of that strategy, in the last two years, CONMEBOL club competitions have been greatly improved through a new format design and the adoption of standards, designed to increase the quality of the tournaments from competitive, sporting and commercial points of view. Thanks to the recently adopted improvements, CONMEBOL tournaments last year achieved record numbers in digital participation, stadium attendance and sales.