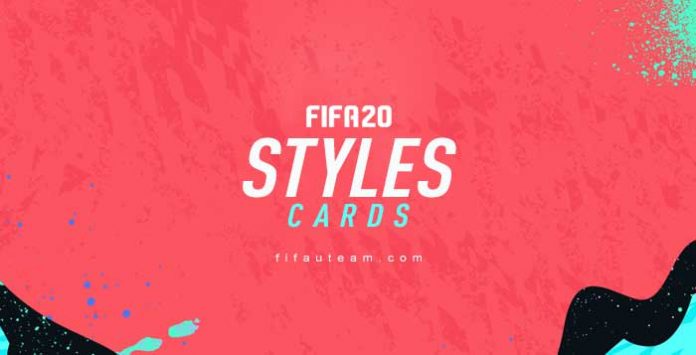 FIFA 20 CHEMISTRY STYLES
ROLES | LIST | BONUS | HOW TO USE

What are FIFA 20 chemistry styles?

Chemistry Styles are consumable cards. As any other consumable, they can be purchased on the market, or obtained from a pack.

In FUT 13 and earlier editions, players received boosts for every stat. Since FUT 14, players receive boosts for a chosen number of stats dependent on the Chemistry Style selected. These cards can be applied to a player to change their style of play adjusting the players attributes to their squad needs.

The chemistry styles cards do not change the chemistry numbers. They redistribute the stats that will receive chemistry boosts. Chemistry boosts will increase the value of specific in-game stats – thus increasing the player’s ability to perform.

Each one of these cards can only be used once. However, they can be applied to each player as many times the gamer want but only one per player at a time. As it happens with positioning cards, its effects are permanent until a new chemistry style is applied to the player. When someone trade a player card, the buyer will keep the style that it is active.

Every single chemistry style included in the game How are stats improved with the FIFA 20 chemistry styles cards?

There are two things that we can find on a player’s card about the FIFA 20 chemistry styles. The first one is the name of the style that is active in that player. The second one are small arrows showing which stats will be affected by the chemistry and the maximum available stat boost.

These arrows can be white or green. A white arrow indicates a possible boost that isn’t being received, which will mean that player doesn’t currently have high enough Chemistry to get the maximum benefit. A green arrow indicates that the stat will be boosted. The more arrows per stat, the bigger will be the available boost. The more green arrows per stat, the bigger will be the boost. The maximum number of chevrons that can be filled is 6. These chevrons are only indicators. Not necessarily mean that the attribute in question is going to be increased by the same number of points as the number of chevrons filled in green.

The goal of any player should be to fill all available arrows. In order to do that, is requested a high chemistry as we will see later. The maximum number of arrows that can be filled is 6 for each player card.

In the first picture, the player has six white arrows, one for each stat. It means that all the stats will be improved in the same way, but right now he doesn’t have enough chemistry. In the second picture, the player has full chemistry, which means that he will get the boost for all the stats. In the third picture, the chemistry style applied may give a medium boost to three stats and in the fourth the chemistry style applied may give a maximum boost to two stats.

How to use correctly FIFA 20 Chemistry Styles cards?

The Chemistry Styles allow you to choose what stats are changed but not by how much it will change. It depends on your chemistry. If you get individual chemistry 10, you will get the highest improvement possible on the stats you have chosen.

As we have shown, to get green arrows we need high chemistry. But how much? To know the relationship between Chemistry and arrows, just check the following table:

As we already have explained, with higher chemistry the boosts will consequently be higher. Looking to this table you can see, for example, that if you place a player with a chemistry of 7, he will lose half of the boost. In the same way, if he only has 4 of chemistry, it makes no sense to apply him a chemistry style since no stat will be boosted. To chemistry values lower than 4 the in-game stats of the particular player will gradually be lowered, hindering the player’s ability.

You probably have understood that for chemistries lower than 10, there will be less stats boosted. But which stats are affected by lower chemistries? In a basic chemistry style, for example, if the player has chemistry of 9, which stat loose its boost? The answer is given in the following table:

Note that the numbers on the table are the number of arrows. It does not necessarily represent the number of in-game stat boost. There is no information about how many stat points are represented by one arrow.

In order to show that chemistry style is something simpler than it seems, let’s see an example.

Imagine that in squad with chemistry 100, we have a player with full individual chemistry and maestro chemistry style activated. In-game, three of his stats will get a medium boost and the other three will remain the same as usual. Imagine now that we want to make some changes in our squad and in the new position he only gets chemistry 6. Instead of six green arrows, he only gets one green arrow for dribbling and other for passing (we can check this in the above table or selecting the player and scrolling left with the analogue stick). In these conditions, apply him an engine chemistry card has no effect at all, as you can see on the images below.