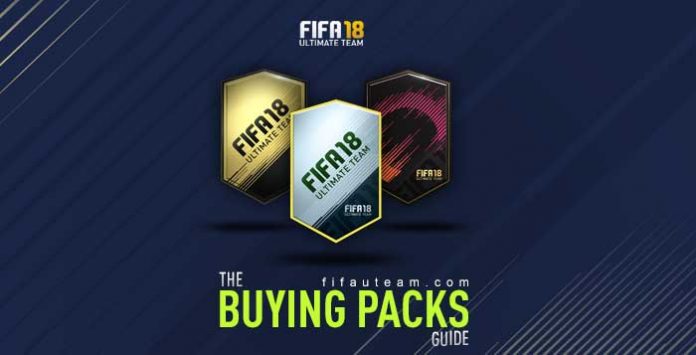 Buying packs is something that most of the community does at least once. But it is not as simple as it seems. You have to know which packs to buy and when it is the right time to do it. If you want to go deeper, you also should know what you can do to pay less for them. All these questions and much more are answered in our buying packs guide for FIFA 18 Ultimate Team..

What you need to know about FIFA 18 Packs

FUT 18 is a very popular FIFA game mode where we try to get the right cards to build the best team possible. Packs are one of the most important things in this game since they make it possible to introduce the cards into the game. Without them, there would be no cards and without cards, FUT 18 would not exist. It is as simple as that.

All the cards are introduced in FUT 18 through packs by one of the following ways:

More than 90% of the cards are introduced in the game by the store, when players buy packs. This is what makes this game mode so special for EA Sports. It is a gold mine. Only in FIFA digital sales, which includes Ultimate Team packs, EA has profits higher than $800 million every year. FIFA digital net revenue is growing every year and microtransactions are now the core business of the game.

Follow us in this guide to get to know how, where and when to buy packs.

How to Buy Packs

The FUT store: how to use it

If you want to buy packs, you need to go to the FUT store. You can access to the store through the console or through the FUT Web App / Companion App.

It is possible to browse them in the store until you find the right pack. Details of each pack are also provided, including the number of rare cards each pack has. The store has also a folder ‘My Packs’ where you can claim any packs that you have earned but not yet opened. Most of the packs don’t expire, which means that you can store them and open when you want. However, be aware that there are exceptions, like daily packs and free packs from the special editions.

There are two ways to pay: with coins or with FIFA Points. To know more about FIFA Points, click here.

To buy a pack you just need to select it in the store and choose the payment method. If you need more details about it, just watch this video.

There are three types of FIFA 18 Packs for Ultimate Team:

PROMO PACKS
Available only on specific periods of time.

FREE PACKS
Not available to purchase on the store. They are assigned to you in the beginning of the game, as daily gifts and as draft, Squad Battles, SBC, FUT Champions or seasons rewards.

If you want to know more about each pack, please click here.

The Best Packs to Buy

Another question that the community asks us almost every day is ‘which pack to buy’. Obviously it depends on what you want. If you want to build a bronze squad, you should buy a bronze pack. If you want to get more contracts and other consumables, you should try the consumables packs. However, most of the players want to put their hands on the best and most expensive cards in the game. In that case, they will need to buy Gold packs. But which one?

Our advice is very simple: purchase the available gold pack with the lowest price per rare player card. These are the only cards that can make someone rich. The other cards are almost worthless. To know which packs have the lowest price per rare gold card, we only need to divide the price by the number of rare cards. It is easy to do it, following the table above. However, we should pay attention to the category of the pack and if there are other cards besides players. The best packs are the ones with guaranteed rare gold players cards. Into this group, the Premium Gold Players Pack is two times more expensive than the Rare Players Pack or the Jumbo Rare Players Pack. This difference is not so high if we use FIFA Points to pay instead of coins. It may be weird but EA Sports doesn’t use a proportional relation between coins and FIFA Points. For example: Jumbo Premium Gold pack and Silver Upgrade pack cost both 15,000 coins but the first one may be purchased with 300 FIFA Points while for the second we only need 50 FIFA Points. Players should also pay attention to this aspect.

Forget the calculator. We did that job for you. We analysed how many gold rare players cards (GRP) each pack brings, in average, and we built the following table showing the rating of the best packs to buy. As you probably expected 50k, 100k and 125k packs are the best ones, because you only have to spend around 4000 coins for each gold rare player. However, those of you who thought that 25k were good, well you are wrong. It is cheaper to buy multiple 15k and 7.5k packs. It is impossible to talk about the best times to buy packs without referring to Happy Hours.

There are several misunderstandings about what Happy Hour is and how it works. Some players insist to say that Happy Hour is a period of one hour in which the chances of getting better cards are higher. This is not absolutely true. We will try to clarify this to those people.

A happy hour is a period of time with promo packs available in the store. It may be just one hour but it may also be a full day or even a weekend. Besides the regular packs, during happy hours other packs also exists. They are usually more attractive than the regular ones, because they have a lower cost per rare card. The chances of getting a good card during a happy hour are exactly the same. The only difference is that, most of the times, there are cheaper packs during Happy Hours.

There is a very rare kind of HH in which the chances of getting a good card are higher. These special promo packs times are announced as ‘2x Chances’, which means that the chances of getting an IF card during this period are two times higher than usual. However, these special Happy Hours are very rare. They only happen two or three times in a year.

EA is not using the term ‘Happy Hour’ anymore. They replaced it by ‘Promo Packs available for a limited time’ and they are not announcing it in advance. You may know if there are promo packs on the store, going to the the main page of the FUT Web App or the consoles while it is active, or checking our dedicated page.

Happy Hours are more common at the end of the game. It is impossible to know when will be the next one but they occur almost always at 6pm (UK time). Promo packs are always released during the FUT events and also in most of the weekends. In other hand, it is very unusual to see promo packs in the FUT store on a Wednesday.

Something that should be avoided is to buy packs between 5:30pm and 6pm of Wednesdays because it is impossible to get IF cards in these periods. In another way, it is a good strategy to buy packs during good TOTW weeks or on TOTY/TOTS weeks. In the case of success, the profit will be much higher. Remember that when a player gets his IF cards in packs, it is impossible to find his regular card there. Your odds of pulling an IF card from a pack are exactly the same of pulling the regular card of that player during that period.

There are rumours that EA uses some extreme tactics to sell more packs. People say, for example, that there are better cards inside packs paid with FIFA Points and packs bought after new IF cards being released. Both make sense. In the first one, they are promoting the buying with FIFA Points. Fresh money. In the second one, they are creating the snowball effect of ‘if they got it, I also have good chances’. However, there is no way to prove if they are only rumours.

How to Pay Less when Buying Packs

How to get a discount

There are many players confused about what they should do: buying packs on the store, subscribing the Origin & EA Access or buying the ICON or Ronaldo Edition. We will try to give a help.

Let’s start by the special editions. It is true that the packs purchased on the store are more expensive than the ones these Editions offer. However, we strongly recommend to not buy these special edition because of this since it only gives one/two packs per week. It means that players need to wait up to 20 weeks to get all the packs. No one wants deserve to wait so long.

With EA & Origin Access things are a bit different. Instead of free packs, you get a discount: you pay 10% less when buying packs on the store with real money (FIFA Points). For who buys many packs, this may be something very useful. The one year subscription gets paid after buying packs that is worth 20k FIFA Points. What has changed this year

For experienced Ultimate Team gamers, most of what we have published here isn’t new. In that way, we have created this very short chapter to show what has changed with packs:

Q: Should I Invest in Packs?
A: In our opinion, no. Only if you don’t care about spend real money to get a good team.

Q: What is the Card weight?
A: Card weight is a metric used to estimate how often a particular card is traded on the FIFA 18 Ultimate Team transfer market.

Q: Which Packs Should I Buy?
A: Always look to the available gold packs with the lowest price per rare player card.

Q: Where do I need to go to buy packs?
A: To the store. You can do it through the console, the FUT Web App or the Companion App.

Q: What is a Happy Hour?
A: A happy hour is a period of time with promo packs available on the store.

Q: It is easier to get better Cards on promo packs times?
A: No. Only in the Happy Hours announced as ‘2x Chance’.

Q: When is the next Happy Hour?
A: No one knows. The HH are announced on the console when they start. You can also check them here.

Q: Should I buy an Origin/EA Access subscription or should I use that money to buy packs?
A: If you buy packs too often, subscribe the Origin or EA Access. Otherwise, invest in packs and forget these services.