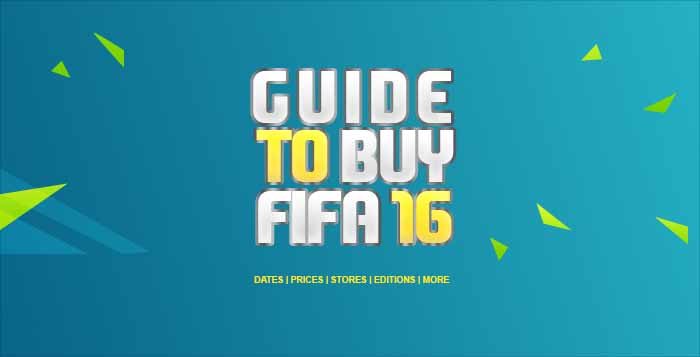 If you are planning to buy FIFA 16, you need to read this article: the Guide to Buy FIFA 16, where you will find the best tips to find the best prices and stores, as well as pick the right edition for you..

June 28th, 2015
If you buy FIFA 16, do it through one of the following banners.
You will be helping us to keep our project alive.

If you are reading this it is because you are probably planning to buy FIFA 16 and want to know more details about the game. Our goal is to help you to know where you can buy FIFA 16, how much you will pay and for which edition you will choose.

Should I buy FIFA 16 ?
Platforms
Editions
Dates
Stores and Prices

The first question everyone should do is if they are going to buy FIFA 16. If you are reading this article, it is because you probably already made that decision. In fact, only you know how important is money to you, and if it is well spent in FIFA 16 or not. The best we can do is to explain what we think about the buy.

In our opinion, if you are a FIFA fan you definitely should buy FIFA 16. It has a few improvements and the database is up to date. You can expect a game with the usual issues, like slow servers and lots of bugs, but the fun is guaranteed. In the other hand, if you are a casual player and you are looking for a football / soccer simulation video game, FIFA 16 is still a good choice. You have to choose between FIFA and PES and it looks that the EA’s title is still much better than the Konami’s video game. If you are not a football fan, then there are many other games that can make you much happy than this one.

Q: For which platform FIFA 16 will be released ?
A: Microsoft Windows, PlayStation 3, PlayStation 4, Xbox 360, Xbox One, Android, iOS and Windows Phone. Electronic Arts confirmed that neither a PlayStation Vita version nor a Nintendo 3DS version of the game will be launched.

Q: Which platform should I buy FIFA 16 for ?
A: FIFA 16 for fourth-gen consoles is a much better game, more fluid, but you should pay attention to the fact that if you are planning to buy a PS4 or XBox One only to play FIFA, it will probably cost you more than 450 pounds. It is not worth it. Buy FIFA for the platform you have. Keep in mind that, between PC and fourth-gen consoles, our suggestion goes to PS4 and XBox because there are too man cheaters on PC.

Q: What exactly each edition offers ?
A: Here they are the offers of the three FIFA 16 editions:

Q: What is the FUT Gold Packs offer ?
A: It is a code for packs entitlement each week for use in FIFA Ultimate Team mode.

Q: When do FUT Packs codes have to be redeemed by ?
A: The codes must be redeemed by October 11th, 2015, to receive all packs included in the offers. Late code redemption will result in forfeiture of previous weeks’ pack entitlement. Failure to download and/or use the pack in any given week will result in forfeiture of that week’s gold pack offering. Each pack weekly offer is valid for 7 days and must be redeemed within that time period. The code to redeem the packs codes expires at January 17th, 2016 (Standard Edition), February 21st, 2016 (DeLuxe Edition) or July 10th, 2016 (Super DeLuxe Edition).

FUT Loan Player
Like in the previous year, in FIFA 16 it is possible to unlock players on loan from the EA Sports Football Club Catalogue using football club credits. However, the loan of Lionel Messi, Sergio Agüero and Thibaut Courtois for five matches is exclusive for players who buy the DeLuxe and Super DeLuxe edition.

Goal Celebrations
Two exclusive new celebrations pulled from real life: channel your inner Wayne Rooney with the ‘KO’ move and use the ‘Bailando Robot’ to celebrate your goals.

Q: How much more do I pay for the DeLuxe and Super DeLuxe Editions ?
A: It depends on the stores. Check your local store for prices or take a look to the stores and prices chapter, please.

Q: Do I need to buy FIFA 16 ‘s DeLuxe or Super DeLuxe editions in order to play this game mode ?
A: No. Ultimate Team mode is available in every editions.

Q: Which edition should I buy ?
A: The main difference between these three editions are the gold packs. The most expensive ones also bring another offers but, in our opinion, they are not worth it. Besides that, the official retail stores also offers one of these EAS FC items in the Standard Edition.
If you usually do not play Ultimate Team, you should choose the standard edition and save some money. Many will say to you that you should choose the DeLuxe and Super DeLuxe Edition, but we have a different opinion. First of all, the standard edition brings 15 FUT 16 packs, which means that the difference between editions is not 40 packs but only 25. We know that the gold packs from the Super DeLuxe Edition bring more rare cards and are cheaper than if you buy them on the store but there is something you should not forget: you only get one gold pack per week, for 40 weeks. This is a huge disadvantage since you need those packs as soon as possible to build your dream team. The market depreciates over the time, so when you redeem your last pack you probably no longer need it. The packs of the DeLuxe Edition are not as good but at least you get two packs per week. We also know that many gamers love to own a FIFA 16 cover and DVD with “DeLuxe Edition” or “Super DeLuxe Edition” printed in, but the extra cost is too much money for it. Q: What can I do to get early access to FIFA 16 ?
A: All three editions of FIFA 16 will be available to pre-purchase with EA Access. You can subscribe to the EA Access program – exclusively available to XBox One – or buy the game in another console’s region (you will need a PSN / Gamertag account from North America, if possible). Another way of playing FIFA 16 earlier is using an active Season Ticket subscription.

Q: When will FIFA 16 be released for Season Ticket holders ?
A: The exact date depends of the season ticket holders’ region. It is 3 days before the release date. For example: in North America, FIFA 16 will be available in September 19th. The last chance to purchase a season ticket ended in march 2015, so if you don’t have one you can not buy it now.

Q: When will FIFA 16 be released for EA Access subscribers ?
A: The exact date depends of the your region. It is 5 days before the release date. For example: in North America, FIFA 16 will be available in September 17th.

Q: If I have an active Season Ticket subscription but don’t buy the game, how long I will be able to play FIFA 16 by the early access ?
A: The early access only works until the FIFA 16 release date.

Q: What do I get by pre-ordering FIFA 16 ?
A: The offers we announced are exclusive for pre-orders.

Q: Until when I can pre-order FIFA 16 ?
A: Pre-orders are accepted until the day before the FIFA 16 release. The game is dispatched in the release day.

Q: Should I pre-order FIFA 16 ?
A: If you really plan to buy FIFA 16, you should pre-order it. You will get 15 FUT gold packs for free, which is better than nothing. However, if you don’t plan to play it all the time, buying it later on, especially at Christmas, may be cheaper as game prices can drop around this time. Q: Where can I buy FIFA 16 ?
A: FIFA 16 is sold in thousands of stores all over the world. However, we suggest you to buy it from an official retail store because they usually have small incentives for you.

Q: Where should I buy FIFA 16 for my console ?
A: If you live in UK or Republic of Ireland, you have two good options. Game has more offers but our suggestion is Amazon because it is cheaper and have an amazing customer service. You can check the prices in the following table.
If you live in USA, you should know that the stores are asking the same price. In North America, the FIFA 16 price is the same for third-gen and fourth-gen consoles. In our opinion, you should wait a few weeks more because this stores usually make special discounts. Q: Is it possible to download FIFA 16 through my console ?
A: Sure. You just need to go to PSN store or XBox Marketplace and buy FIFA 16. After the payment you will be able to download it and play.

Q: Should I buy FIFA 16 directly from the console or from a retail store ?
A: Through the console you will not get all the offers, it is usually more expensive and you will have to download a huge file. It may be a good choice for who lives in a place where the retail stores don’t delivery. A retail store is still our suggestion.

Q: Where should I buy FIFA 16 for my PC ?
A: Amazon is the right choice if you want to pre-order the disc version. However, if you prefer the download version, you may save a few pounds buying in Origin. It is easier, because you don’t have to wait by the download code that will be emailed to you near release date, and it is the only option available to get the DeLuxe and Super DeLuxe editions.

Q: How do I buy FIFA 16 ?
A: Now, that you probably know where you want to buy your FIFA 16, it’s time to do it. Just go to the store you have chosen and place the order.
If you want to buy from Amazon, the best option in our opinion, do it through the following banners. You will have the same prices and offers but you will be helping us to improve our website. Please, do it to help us to bring more high quality content. Even if you want to buy other articles, you may click on the banner to enter on the store. We will appreciate it.

Q: This Guide to Buy FIFA 16 is quite long. What do I really need to know ?
A: These are the main topics:

– There are three FIFA 16 editions;
– Standard Edition is good enough for most of the gamers;
– The game will not be released for PlayStation Vita nor Nintendo 3DS;
– Season Ticket and EA Access gives you up to 3 days of early access;
– Pre-orders of standard edition gives 15 FUT Gold packs;
– Amazon is the best choice for buying FIFA to PC and consoles.

If you have any questions about this Guide to Buy FIFA 16 or if you need support, feel free to ask us.