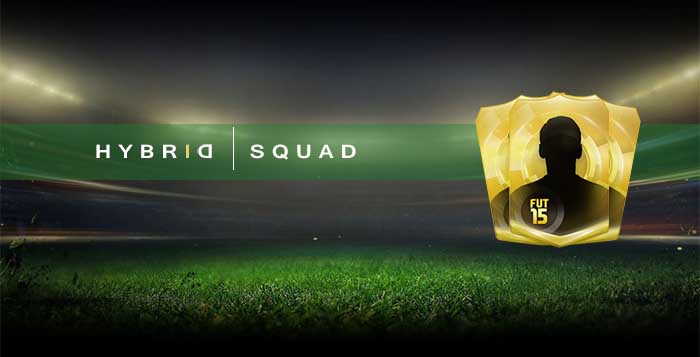 By definition, a hybrid team is a squad built with players of different leagues and nationalities. They are difficult to build and unless you already have some experience, you will spend lots of time trying to make a hybrid squad with high chemistry. In this article we will try to help you with hybrid squads. We will share three tricks with you that will speed up the process.

How to Build a Hybrid Squad with High Chemistry

You may already know how everything works but extra help and tips ‘n’ tricks are always welcome.
We show you here three advanced techniques to build hybrid squads with good chemistry.

The hybrid squads are the most perfect. They allow us to go to other leagues and look for players to complete the positions we need. If built well, a hybrid team can join good chemistry via a bigger variety of quality players. Building a hybrid team with good chemistry may not be easy. This technique consists, if the formation allows us, in cutting the team in half. Each side is filled with players from one league or one nationality. That is enough to get high chemistry, because there will be no player with more than one dead link.

To show you how well this technique works, we have built a Serie A / Barclays PL hybrid. The right side of the team is filled with players of the Italian league and the left side is filled with players of the English league. As you can see on the image below, all players have individual chemistry of 10. Every player that has a dead link, needs a strong or a hyper link to reaches the maximum chemistry.

Pros
It may also be applied, splitting the team transversely, ie between the defence and the midfield.
Very easy technique.
Cons
It is not possible to split teams into two parts for all the formations.
The players who connect with the other half may need a strong link to reaches the maximum chemistry.

There are some formations that are more favourable for building a hybrid team with high chemistry. It’s the case of the 4-2-3-1 formation, for having two key elements that allows split the team in two. These players should have characteristics that connect well with any of the two parts. In that way, it is possible to do something similar to the Squad’s Split Technique but the formation doesn’t need to be divisible and without the chemistry problems of the players that make the connection between the two leagues and/or two nationalities.

To show you how well this technique works, we have built a hybrid squad with German and Spanish players. The key players in this 4-2-3-1 formation are the two CDM’s. To choose a German BBVA player and a Spanish Bundesliga player it is enough to get the maximum chemistry to all the German players in the attacking side and all the Spanish players in the defending side. It was not even necessary to place a manager.

Pros
If the key players are well chosen, weak links will be enough in each one of the sides.
Cons
There are just a few formations suitable for this technique.

The most experienced players can build a team that apparently presents just few things in common between the players. Unlike others, the perfect links technique is not based on a league or nationality but on hyper links. The same is to say that each player needs to be connected, at least, with a team mate from the same country and same club. For players with three or less connections, it is enough to get a strong link. The squads of this technique is the most fantastic since it is possible to have more than 6 leagues and nationalities in the same single team.

To show you how well this technique works, we have built a hybrid squad with players from three leagues. Although most of the connections are dead links (red), we got the maximum chemistry for every player. If it was not your case, you should focus the manager bonus on the players with lower chemistry. For players with only two connections, the hyper link may be replaceable by a strong link, without damaging the chemistry. It was what happened with the wings. This technique allows us to choose the players we feel more capable without thinking about their leagues and their nationalities.

Pros
This technique allows the building of truly unique teams.
Cons
The number of players with hyper links is limited.
For players with four or more connections, the maximum chemistry can only be reached with other links and bonuses.

Now you have no excuse to not build a hybrid team in FIFA 15 Ultimate Team. Let’s do it !