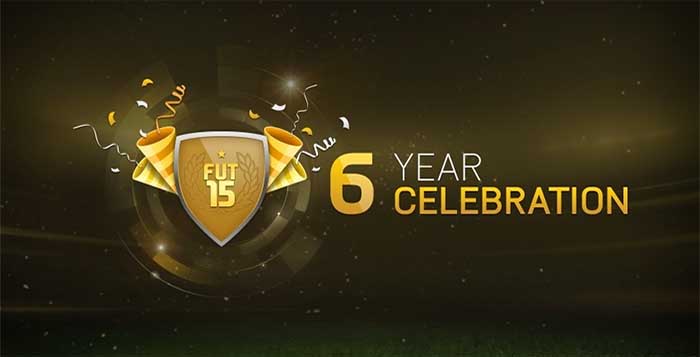 It is the sixth birthday of the most popular FIFA game mode. Celebrate 6 years of FIFA Ultimate Team with 6 free packs and find out this week’s special FUT 15 events.

To celebrate FUT’s sixth birthday, FIFA Ultimate Team will be holding special events throughout the week.
Let’s see which ones…

Everyone loves free packs. And EA know it. As a thank you for your support, they are giving away free packs to all FUT 15 players.

Between March 23 (Monday) and March 29 (Sunday), you will get a untradeable Gold Rare pack in your account, one per each day. You just need to go to your PC or console and open your FUT store. Remember to claim yours each day because they don’t carry over. You can not sell them and the discard price is 0. These packs should be available for everyone except for mobile players. A new free pack is announced every day at 6pm (UK time).

Don’t forget to share with us in the comments section what you pull from these free packs. Community was asking why since March 18th, EA did not released a new tournament. Now, they know. To celebrate the sixth FUT anniversary, EA released the tournament of the year. The main rewards are not as good as the ones of St Patricks, but there are something more.

The FUT Birthday Cup starts at March 23 6pm (UK time) and ends exactly six days later at March 29. The only requirement to play is to use a five star rating team with full chemistry. If you win the online tournament, you get 15.000 coins. In the first win you also get a 50k Rare Players pack (12 rare players). If you win the single player version, in World Class difficulty level, the 15k reward is replaced by a 7k reward.

But, as we previously said, there are something special in this tournament: play at least one match in the FUT Birthday Cup for a chance to win rare tradable In-Forms from previous Team of Weeks. And we are not talking about common IF cards. As you can see above, the cards that will be assigned are from top-players. Each one of the six days, 1,000 gamers will get one of these amazing cards. Winners will be chosen at later date, so you will need to be patient. Once again, mobile gamers are not eligible to this giveaway.

You can know more about FIFA 15 Ultimate Team tournaments here.

As usual in these special occasions, new pack offers will be available every day. Starting at March 23 and until Sunday, a new Happy Hour will be released at 6pm (UK time).